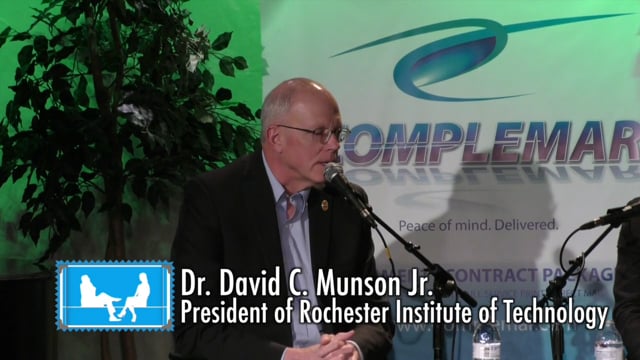 Bullish about our future, aligned with the times

We were recently honored to host Dr. David Munson, RIT’s new president, as our guest at RocGrowth Candids. We generally feature some of Rochester’s leading innovators at this event. Given Dr. Munson’s role in guiding one of our region’s greatest contributors to innovation and entrepreneurship we were excited to hear what he had to say.

During the 25-minute interview and Q&A that followed, he left the packed house convinced that he is the sort of visionary leader our region deserves. You can watch the full interview here. His humility, intelligence and capacity for change will be self-evident; however, I would like to highlight several items that make me feel he’s aligned with the times.

Dr. Munson had previously served as dean of the University of Michigan’s engineering school. There, he witnessed how a large, well-funded institution capitalized on its resources to deliver a top-notch education, while helping drive regional economic development. He intends to apply many of the techniques at RIT. I would be remiss to omit that he also helped cofound a tech startup while at the University of Illinois and learned practical lessons about commercializing research and technology transfer.

As a former venture capitalist and mentor to entrepreneurs, I can vouch for the coherence of his message and the justification and approach. He understands the role of community and “creative collisions,” as RocGrowth likes to call them. Innovation is not done in isolation—not in the lab nor on campus. Outsiders can contribute by providing advice, contacts and funding. RIT is already engaging with alums and friends of the university from throughout the world and will accelerate that process.

I particularly appreciated his exposition about the importance of a well-rounded education. He is committed to developing greater programming in the performing arts and emboldening the liberal arts school. Don’t we need more people in the world that are critical thinkers with some knowledge about history, economics and the humanities?

Throughout the years I have been stunned at how many talented techies taught themselves to code. Also, how many of them were steeped in the arts, whether as musicians, painters or, simply, patrons.

RIT is already one of the largest private universities, well respected around the world. I truly believe its impact on our region, and the world, will only grow. We share a bright future together.

Richard Glaser is co-creator of RocGrowth and RocGrowth Candids and Coffee events. He was recently presented with Upstate Venture Connect’s Community Catalyst award for organizing programs that bring together diverse startup ecosystem players.

Richard Glaser is co-creator of RocGrowth and RocGrowth Candids and Coffee events. He was presented with Upstate Venture Connect’s Community Catalyst award for organizing programs that bring together diverse startup ecosystem players.

The importance of a small win

Richard Glaser is co-creator of RocGrowth and RocGrowth Candids and Coffee events. He was presented with Upstate Venture Connect’s Community Catalyst award for organizing programs that bring together diverse startup ecosystem players.

Join us at our events

RocGrowth Candids and RocGrowth Coffee are produced on alternating months and feature interviews with leading entrepreneurs and presentations by local innovators.